New loan for solar water heaters to be introduced

By the agreement signed within the framework of “Support for Renewable Energy” loan program of KfW German Bank and Central Bank of Armenia, the new loan aimed at solar water heaters will soon be available.

Deputy Minister of Energy and Natural Resources Hayk Harutyunyan told Banks.am about it and noted that it will be issued by the allocations of the abovementioned program’s third phase.

“The first and second phases of the program were aimed at small HPPs, while the third was aimed at the development of other renewable energy sources. After long studies and discussions we arrived at the conclusion that presently solar water heaters are the most rapidly developing, are beneficial and have great potential for efficiency,” said Hayk Harutyunyan.

Our interlocutor noted that the new loan product for solar water heaters will come in Armenian dram.

“The Central Bank of Armenia will set 10.5% maximum interest rate for private banks. The loan maturity will depend on the program’s payback period – if the program ensures the payback in five years, which is an accepted term for such systems, the maturity will be five years. The loan product will be offered by almost all banks and several leasing companies already cooperating with the Central Bank,” said the Deputy Minister of Energy and Natural Resources.

Hayk Harutyunyan noted that in case of loans lower than a certain volume the mandatory 70%/30% co-funding requirement will be canceled.

“This loan product will enable the borrower to get a solar water heater without any initial payment and if the system is properly installed, then the borrower will pay for his loan commitments solely at the expense of savings. We do our best for the borrower not to “carry” extra load,” said the Deputy Minister.

According to him, the legal framework is regulated, and the loan will be available in the coming months.

“Once the loan is introduced, we expect solar water heaters to be widely used. We estimate it can address the population’s warm water needs, and result in 80% (on average) gas saving.” 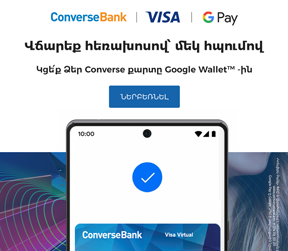 Eduardo Eurnekian awarded with the keys to the city of Florence